In 1734 Elector Karl Albrecht ordered work to commence on the Amalienburg, a small pleasure palace and hunting lodge for his wife, Maria Amalia, a daughter of Emperor Joseph I. Sited opposite the Magdalenenklause, the building, which was completed in 1739, was conceived as a small independent palace complex. 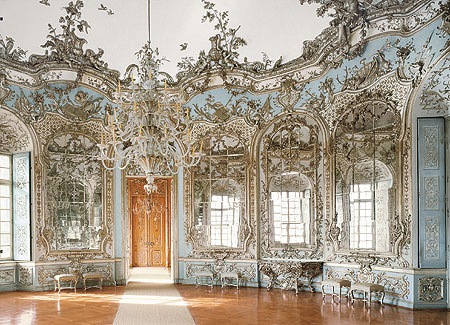 The Amalienburg is one of the most exquisite creations in the European Rococo style. Its ground plan, exterior and sequence of rooms form a gesamtkunstwerk of rare beauty. François Cuvilliés the Elder supplied the designs for the architecture and decoration, and was responsible for overseeing the craftsmen involved. The stucco work was largely done by Johann Baptist Zimmermann, the woodcarving by Johann Joachim Dietrich and the painting by Joseph Pasqualin Moretti.

This outwardly simple, yet noble, building, whose central section is slightly accentuated by a flat dome with a platform, houses a suite of rooms of striking unity. At the same time, however, the individual rooms are differentiated according to the precepts of French court art and in each case variously designed with great refinement. 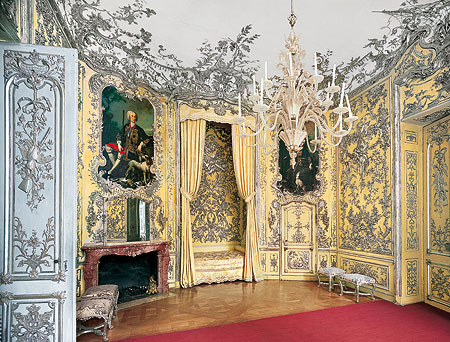 The Large Salon, or Hall of Mirrors, forms the centre of the pavilion. The Blue Cabinet and the Bedroom, or Yellow Room, adjoin to the south, whilst the Hunting Room and the Pheasant Room, or Indian Cabinet, abut to the north. The abbreviated wing structures accommodate the Dressing Room, the Dog and Gun Room, the Retirade and the Kitchen. The richness of the decoration increases towards the centre, culminating in the Hall of Mirrors, a circular room with a flat dome. In this hall, detailing of the stucco work executed by Johann Baptist Zimmermann is less prominent. Silver, off white and delicate blue are the dominant colours. The alternation of windows, mirrors and doors, and the interplay of real and reflected light, seem to remove the room's borders, so that one feels as if one has been transposed into an open pavilion, half arbour, half grotto, above which is the firmament seen through the dome. 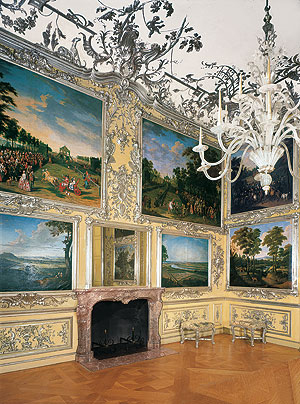 Like the Hall of Mirrors, the Bedroom is also richly decorated. The wall carvings, painted silver on a lemon-coloured ground, combine with the delicate blue stucco work which extends beyond the white ceiling, to form a graceful, rhythmically animated "weave". The wall panelling, executed by the court woodcarver Johann Joachim Dietrich, is one of the finest examples of court carving of the period. The bed niche is flanked by two portraits. The one on the left shows Elector Karl Albrecht, who commissioned the Amalienburg, while the one on the right portrays Maria Amalia, for whom the "hunting lodge" was built. Both are in hunting attire.

The Hunting Room, a pendant to the Bedroom, is decorated as a small picture salon, in which the paintings – in the Rococo manner – are incorporated into the wall decoration, painted silver on a straw-coloured background and arranged in two rows, one above the other. Particularly charming are the depictions painted by Peter Jakob Horemans of court hunts and festivities held by the electoral couple and their retinue.

The Pheasant Room, or Indian Cabinet, has an exotic atmosphere. Its walls are embellished with linen that is painted and waxed in the manner of Chinese wallpaper. The pheasant motif is a reference to the Pheasant Garden, which was laid out in 1734 near the Amalienburg.

The Dog and Gun Room contains paintings of hunting scenes and hunting trophies, executed in the Indian manner in blue on a white background.

The Kitchen, too, is a remarkable creation with an exotic air. Whilst the blue-and-white ceiling is painted with Chinese scenes, the walls are decorated with Dutch tiles. The highlights of this unusually imaginative and colourful tiling are the flowers vases and Chinese scenes.