Friedrich Ludwig von Sckell and Nymphenburg.
The history, design and maintenance of the palace park

Permanent exhibition in the Geranium House

The exhibition in the historic Geranium House – built by von Sckell himself in 1816 as a glasshouse for growing foreign ornamental plants – explains why, for example,

It describes von Sckell’s concept for the park, and in the process explains the basic principles of park maintenance as it is still practised today. 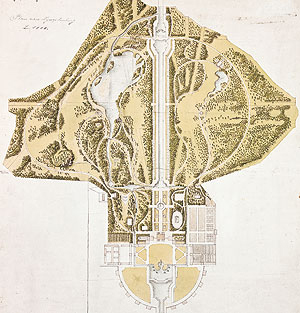 Between 1804 and 1823, by order of King Max I Joseph, von Sckell transformed the existing formal baroque gardens of Nymphenburg Palace into a landscape garden, but left the sections along the central axis as they were.

The regular, geometrical axis and avenue systems with canals and pools, hedge gardens etc. were replaced with naturally shaped design elements, large meadows with various contours and hills, lakes, ponds and streams with naturally formed banks and islands, and winding paths. All the trees and shrubs were planted individually or in groups, groves or woodland areas with irregularly shaped clearings.

In this way von Sckell created scenes of great variety such as the Blutenburg vista and the Löwental (lion valley). The historically important Nymphenburg Palace Park is under protection as a place of historic interest and as a landscape. 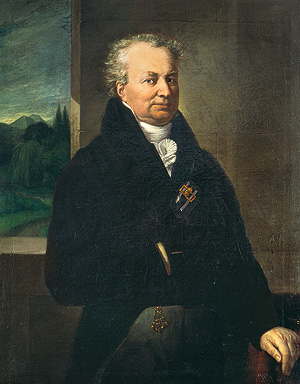 Friedrich Ludwig von Sckell, who was born in Weilburg an der Lahn in Hessen in 1750, was the most outstanding garden designer of his time. He died in 1823 in Munich.

It was largely due to von Sckell that the English-style landscape garden, which had established itself on the European continent in the mid-18th century, also became popular in southern Germany.

With the English Garden and the Nymphenburg Palace Park, he left Munich and its citizens two outstanding, world-famous masterpieces of garden design. Both parks are the responsibility of the Bavarian state.

The Bavarian Administration of Palaces, Gardens and Lakes maintains and restores this legacy on the basis of the Bavarian Monuments Protection Act.