The third pavilion in the palace grounds, built by Joseph Effner, is the Magdalenenklause (Magdalene Hermitage), sited north of the Grand Parterre and constructed between 1725 and 1728. Elector Max Emanuel did not live to see the completion of the building, which was finished by his son, Elector Karl Albrecht. 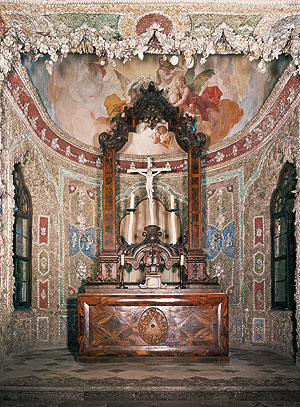 The Magdalenenklause was conceived as the living quarters of a hermit and stands in a small, "overgrown" wood. Built with tiles and partly plastered, it looks like a ruin from the outside. Cracks in the masonry and crumbling plaster serve as a reminder of the frailty of all things earthly.

The one-storey building has a rectangular ground plan and is extended to the south and north with semicircular conchae. At the corners of the east front are circular turrets.

The south part of the Hermitage comprises the Grotto Chapel of St. Mary Magdalene and a similarly grottoed Entrance Hall. To the north are the Electors' Apartments , which consist of monastically austere rooms with oak panelling " à la Capucine" and decorated with copper engravings. 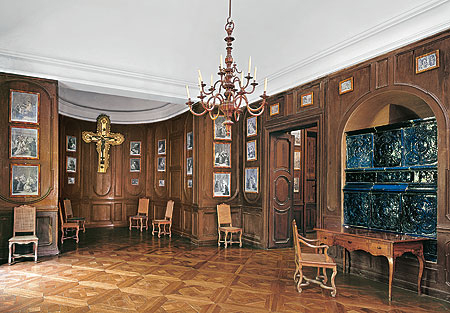 Individual furnishings emphasize the building's strangeness, including the altarpiece in the chapel with a crucifix and two candlesticks made from a narwhal tusk and a Byzantine table crucifix in the refectory, which Max Emanuel took as booty during the Turkish wars in Hungary.

The hermitage enabled the Elector to escape from reality, although his genuine contemplation here was mixed with courtly play. It is another extraordinary Effner creation. By using exotic and historicizing architectural forms, he produced a strange, romantic, anachronistic structure that incorporates both a serious aspect and elements of the courtly art of metamorphosis.